10 Amazing Things to do in the Beautiful City of Prague

Prague is one of our favourite Cities in Europe. It’s got an incredible mix of fun activities to do, interesting places to visit, great architecture and of course, places to drink. So when we found out that our layover to Beijing would be none other than Prague, we jumped at the opportunity to get our mates together, abuse the latter of that list and see off Europe in true Unravelling Travelling style; cultured and drunk.

In this blog we’re going to explore an itinerary of 10 awesome things to do in the beautiful City of Prague. it’s a city we’ve visited 9 times between us and we know it like the back of our hand. The first thing you have to think about when visiting a City, whether you’ve been before or not, is how to fill your days and get the most of your time.

Old Town Square, is one of the Cities most iconic spots, and a great first stop. It is steeped in history, full of restaurants and bars and during the day it is absolutely buzzing. This is always the best place to find tours of all kinds; during our many visits we’ve found walking tours, Segway tours, scooter tours and loads more. Those three are our personal favourites! The walking tours are a really great way of seeing the City. In this square you’ll also the infamous Astronomical Clock (see below) and the striking, gothic Church of our Lady before Tyn. As incredible as it is, the more you stare at it, the more you begin to realise something is off. You wonder if your eyes are just playing tricks on you, or if one of the spires is smaller than the other. This is because it is. The original architect died in WW2 and the plans were lost, and with only one of the spires built, those tasked with completing the building had to copy it completely by eye. The powers to be pretended that it is deliberately smaller as each spire is supposed to represent Adam and Eve, the smaller is supposedly the fragile femininity of Eve (yawn). It’s quirks like this that give Prague a certain charm.

There’s lots to see in Old Town Square, including the amazingly underwhelming Astronomical Clock, which is Tripadvisor’s second worst attraction in Europe, after the Mona Lisa. You can catch the shows on the hour, although it is currently under refurbishment. You will always see crowds of people in front of it just before the minute hand hits 12 and it’s always funny seeing people’s somewhat disappointed faces once it’s finished. That all being said, it’s still worth a visit!

For all of you classical music lovers, this one’s for you. We were introduced to this iconic building on one of our walking tours. It was no more than 5 minutes away from Old Town Square. The reason that this theatre is so famous is because it was home to Mozart’s debut performance of Don Giovanni, when the crowds loved it so much that they gave it a 30 minute standing ovation. You can take guided tours of this theatre for 120czk (around £5) or 80czk for students.

Home to many protests during the Communist era in Prague’s troubled history, Wenceslas Square is a must visit for everyone. One of the most famous moments in the history of this Square was the self immolation of Jan Palach, a Czech student who, in protest against the Communist regime, climbed to the top of the gallery at the top of the square, dropped a note explaining his actions and set himself alight. The funeral of Palach turned into a major protest. A month later, another student, Jan Zajíc, burned himself to death in the same place. This was followed later that same year by Evžen Plocek in Jihlava, and by others. Prague has an incredible, yet morbid, history and Wenceslas Square is a great place to explore it.

The Jewish Quarter in Prague is home to Europe’s oldest operating Synagogue. The Old New Synagogue was established in 1270 and was one of Prague’s first Gothic style buildings. It is said that the body of a Golem (created by Rabbi Judah Loew ben Bezalel) lies in the attic. A legend is told of a Nazi agent during World War II attempting the enter the attic, but fell to his death instead. In the event, the Gestapo apparently did not enter the attic during the war, and the building was spared during the Nazis' destruction of synagogues, as it was intended to be a museum of an extinct race. The lowest three meters of the stairs leading to the attic from the outside have been removed and the attic is not open to the general public. The Jewish quarter is also home to the Old Jewish Cemetery, which upon visiting you will notice the unbelievable number of gravestones, 12,000 to be exact. Many people visit here, leaving small pieces of paper on the tombstones in memoriam of those who died in the Holocaust. The reason for the huge number of tombstones is because in the Jewish faith it is not acceptable to move a buried body, so they were forced to add new layers of dirt. There now stands 12 layers, surrounded by huge walls to keep it all in. This part of the City also pays homage to some of the sadder and harder times in this Cities history. You can also visit many of the beautiful Synagogues here for a small fee.

On a slightly happier note, there was a viral video that did the rounds on Facebook not that long ago. A British man by the name of Sir Nicholas Winton, who was in Prague on the eve of the Second World War, organized the rescue of 669 children. He organized homes for them as well as transport. The World found out all about this after he kept it a secret until 1988. His wife told the press which led to this beautiful moment:

The Lennon Wall is one of our favourite places to visit in the City. It’s good for a short visit as well as getting some good photographs. The history of this wall started during the communist era, when people would leave anti-communism writing on it overnight, which led to clashes with the police along with large scale protests. The wall as we know it today has developed over the years, being covered in huge morals promoting love and peace in all of its forms! It really is beautiful, the work changes regularly as people add new works of art, which makes it a great place to revisit.

On the way to the Lennon Wall you will most likely make your way across Charles Bridge. Charles Bridge is iconic for battles and protests. Today, you can enjoy the Gothic Architecture as you walk across, listen to the performers who play there, watch the artists at work and buy stuff from the stalls. One of the statues along the bridge is a famous tourist spot, if you touch the dog on the left it means you are loyal and will return to Prague, if you touch the men on the right it means you will receive good luck! Better touch both then (see above)!

Sitting high above the City on Letna Hill is the Metronome. The red Metronome is 75ft in length and is easily visible from the City and bridges below. The site of the Metronome is symbolic as it was once where a huge statue of the Soviet leader Joseph Stalin was erected. The 17,000-ton statue watched over the City during the Communist era, but was torn down when their regime ended. The Metronome stands as a reminder of the long struggle the country had under communist rule. The views here over the City are truly stunning and is a great spot for a picnic in the sun. You will also find bars up here at certain times of the year! 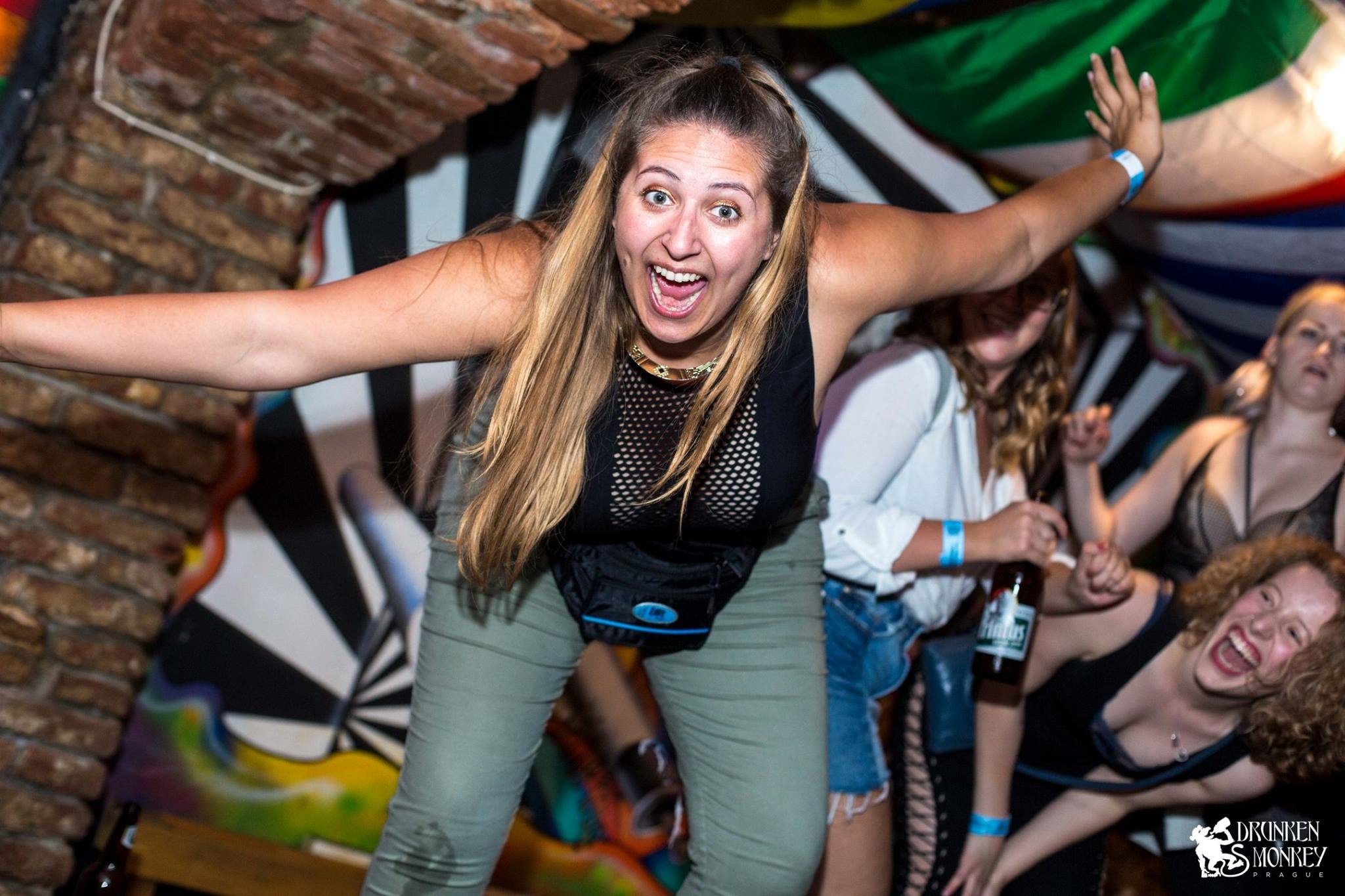 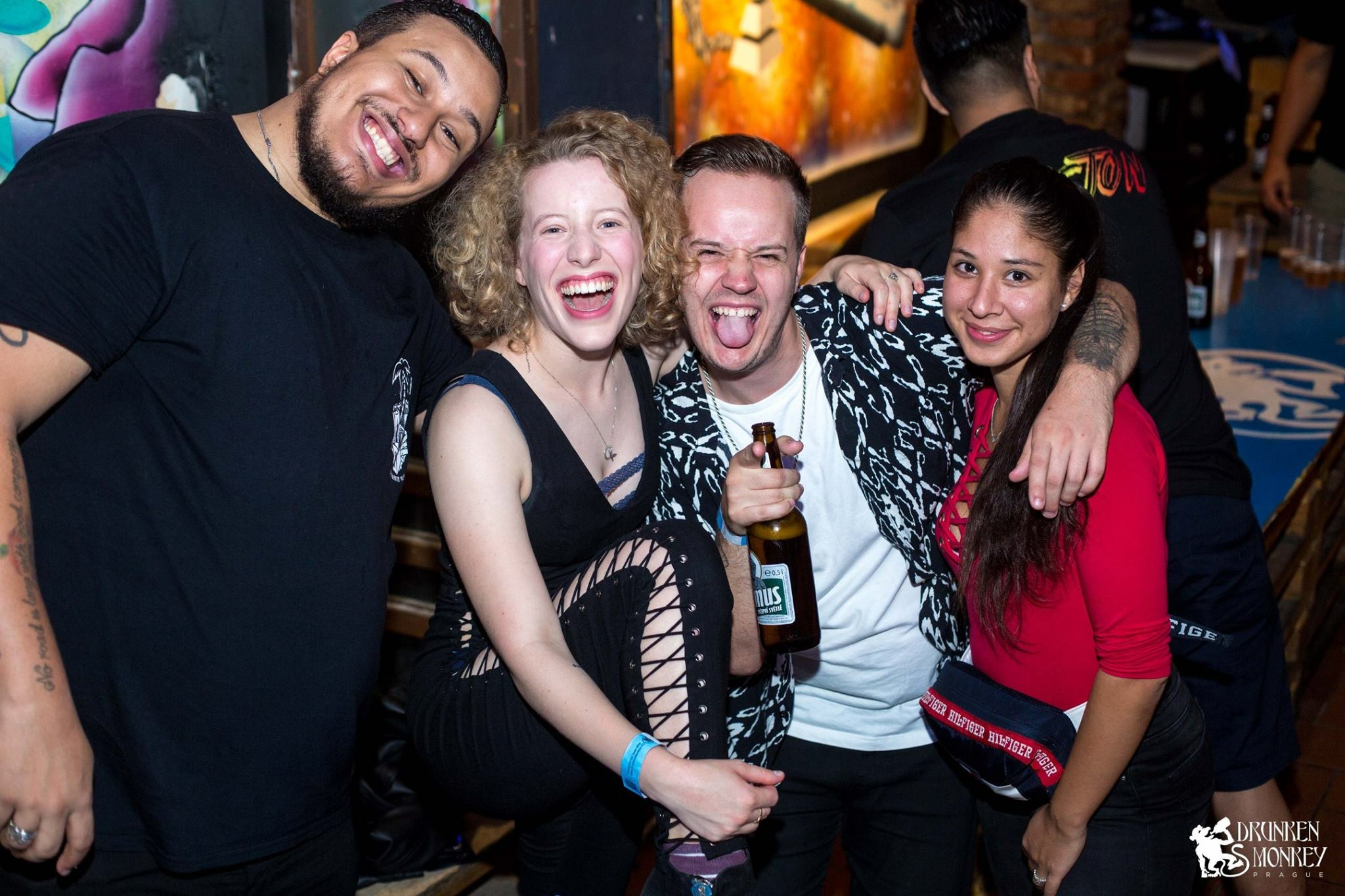 Where do we even start? We have been on this bar crawl more times than we can count. We joined the crawl every single night we were here this year. For 600czk you get two hours of free booze, including beer, wine, absinthe, shooters as well as a huge range of spirits. The drinking games are so much fun and the staff are always amazing. We’ve made some lifelong friends from the staff and had some great nights with strangers and friends alike whilst crawling our way around Prague’s awesome bars. We’ve recommended this crawl to so many people and nobody we’ve ever spoken to has been disappointed. We actually both get free entry now as we’re such loyal customers. We’re currently in talks with the owners about the possibility of discounted entry for people who know us, so keep an eye out!

There’s so much more to do in this amazing City and we find new, fun things to do every time we visit. I’m sure you can all see just why we love it here so much! If you’ve been to Prague before and have any cool places we haven’t mentioned let us know as we will surely be back before long.

What the future holds for Unravelling Travelling

Why Quitting your Job to Travel the World is the Best Choice you will ever Make!

Working around the World: 28 Awesome Jobs you need to do

The Great Wall of China: The Epic Hike you need to Experience

Exploring Beijing - Our Local Restaurant and the Summer Palace

TEFL: How to Conquer the Chinese Visa Process for the First Time

10 Amazing Things to do in the Beautiful City of Prague

Chinatown - the Best of Asian Culture in London